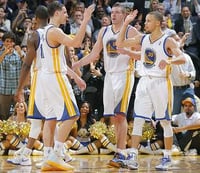 If winning is your business goal, how can you help your team do it?

As you may know by now, I’m a sports fan, generally, and an avid follower of the Golden State Warriors (GSW), specifically. In case you didn’t follow the drama of the 2018 NBA Championships, GSW won. They play like no other team. Indeed, they actually play as a team, something their competition has yet to understand.

The origins of my attention on GSW goes back to me following them when they were based in Philadelphia near where I grew up. My continued and professional fascination with the team relates to how they play the game. I won’t bother you with the details of how they are Teal-like. I do, however, want to pass along this article from The New York Times, “Why Do the Warriors Dominate the 3rd Quarter? Consider Their Halftime Drill.”

As the name suggests, the article is about the GSW’s process of what they do during half-time of each game. The genesis of the article was their extraordinary performance in the third quarter during the entire season and 2018 championship series. In fact, the GSW are known for their astounding third quarter performances. So much so, that by the end of most third quarters the game is essentially won.

GSW leverages what they have learned in the first half of the game to execute a higher performance, often for the win, in the third quarter.

People want to know, what is the team doing during halftime that might account for that third quarter? Is there anything that could be learned from GSW practices?

The GSW 15-minute halftime routine goes a bit like this:

It also helps to know that GSW players keep their ego out of the way. While most teams play to and around their star players, GSW does not. Passing and sharing the ball is encouraged and rewarded. GSW players play with a shared purpose to win, not pad their personal resume with points.

Everyone has a role. Remember those players who did not play the first half, whose input is valued? Because these players are mentally invested and part of the game, they immediately fit in with the teamwork on the court, should they be asked to play. They are ready to play because they have been part of the entire game.

This is the ultimate example of dexterity and quick response on a team level.

I know you recently went through your annual mid-year meeting. This is your semi-annual halftime. How can you bring the GSW dexterity to your team?

Do as GSW does.

What else could be the individual or organizational version of this? I don’t know of anyone who takes a daily halftime and uses it to sense, adjust, and respond to the first half of the day. If you already do a daily huddle, what might happen if your team’s daily huddle was shifted to the middle of the day and restricted to 15 minutes?

Our fall lineup of  Facilitative Leadership Programs begins September 12th   Check it out!