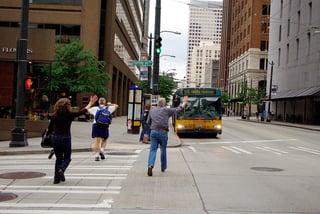 This is the slogan of our times.

You don't walk or amble late. You run. And it's not a joyous run. It's a constant, frenetic pursuit of some notion of being "caught up." But caught up to what?

The world is changing ... rather ... accelerating at a speed and pace that we have never experienced before. Our lives are defined by strains against the clock, technology, politics, and our sense of genuine health and well-being. The notion of predictability and a relaxed confidence in the larger forces of the world feel like quaint notions of a slower time romanticized in history books and our imaginations.

Look folks, here we are in the year 2017. Life has become stressful. Exhilarating and exciting at times, but also exhausting, relentless, and confusing.

How did we get here? And more important ... what can you do about it? What does it mean for you as an individual? For your business?

We've all been there. You're at the restaurant waiting for your friend (next appointment, colleague ...) and the text arrives: I'm running late. Be there in 15 minutes.

When Thomas Friedman, author, journalist, and three times Pulitzer Prize winner, gets this text, he says, "thank you." He even wrote a book on it, Thank You For Being Late: An Optimist's Guide to Thriving in the Age of Acceleration.

When someone is late meeting Friedman, he sees it as an opportunity to hit the "pause" button.

How Did We Get Here?

How did we get to a place in our society where the moments of hitting "stop" have become so precious?

Friedman points to three exponential accelerations that are happening at the same time with the three largest forces on the planet: technology, digital globalization, and the environment ( loss of biodiversity, population growth, and climate change). These accelerations are all interacting with one another and reshaping the world even as you read this post.

Change and evolution operate on a continuum but there is one year that serves as the poster child to the sign of our times.

2007: The Year of Acceleration

Friedman asks a simple question, "What happened in 2007?"

Nothing, right? As far as our memories go it was a completely innocuous year.

Innovations are the benchmarks for speed and pace of change. Here's a small snapshot of what happened in 2007:

This does not even tap into the significant rises and drops in numerous trends and markets. Cloud computing. Growth in the solar industry (with repercussions in the global petroleum market and related politics). Big data. Individuals with internet access. Global climate temperatures. Biodiversity loss. You’ll see a spike in the trends … all corresponding with the year 2007.

The year 2007, says Friedman, is the single greatest technological inflection point in history.

What happened after the single greatest technological inflection point in history?

That's what happened...2008 marks the greatest economic crisis since the depression.

Technology, one of the largest influential forces on the planet, gave a muscled demonstration of its continued exponential acceleration. One year later our human systems, measured by economic and sociopolitical relationships, plunged dragging the environment down with it.

We're still reeling. Our humanity has not caught up with the pace of change that technological globalization has brought to the world. The drama and anxiety of today is the backlash. Our geopolitical, economic, and environmental systems are out of whack. And until our humanity develops the coping mechanisms we need to govern our pace of change we will be living in the gap of this social dislocation. A dislocation so profound, it's marked the beginning of a new geological age; the Anthropocene (an era marked by the dominate influence of humans on climate and the environment).

What does this all have to do with you? For starters, you live in this world. You are trying find a life and run a business in a world where the acceleration and pace of change is creating some really weird, unpredictable dynamics.

How do you, a business owner, work within the larger forces of influence (technology, globalization and the environment)?

You do it by thinking big but acting small.

Everyday you have to remind yourself what is it you feel is important, what is it that you can control, what is it you must do to stay focused and grounded in day-to-day activities. Each of these reminders is like finding and pushing your own personal pause button. By doing so you are giving yourself the ability to turn off the turmoil, drama and anxiety and focus on fulfilling your potential.

This response sounds so simple. So pure. So elegant.

But it demands effort and dedication. It requires thinking and acting differently for a world that is in constant change.

There are numerous organizations whose leaders have figured this out. These individuals have aligned their organizational culture with strategy -- resulting in sustained health, wealth and vitality in all metrics. These leaders are not running behind, they amble along with clear intentions.

Their gains are meaningful and measurable:

The common name for these organizations is Teal.

Teal provides the mechanism that helps you stay grounded in the day-to-day activities and acting with individual purpose in your leadership. It's like mindfulness for your organization giving you the calm and clarity you need to put effort into the activities that are meaningful and healthy to your organization.

Empower yourself to stop running behind. The world will be a better place for it.

Interested in learning more? Beyond Teal presents Facilitative Leadership Program (FLP), based on the work of Bruce Peters, CEO of Beyond Teal. FLP includes a new module called Creating & Guiding Self-Led Teams, based on the principals of Teal and Self-Led.

Bruce Peters has spent the last 15 years living his own “Third Act.” Based on his personal experience and in working as a guide for hundreds of leaders, he has designed a unique process for getting beyond where you are and into the creation of your own Third Act for you and your organization’s version of Teal. It starts with the question of what is the difference you want to make? Learn more at www.beyondteal.com.